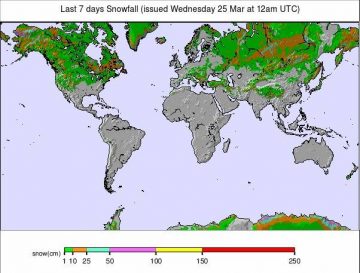 Issued: 25 March 2020 By Patrick "Snowhunter" Thorne They're still skiing in Sweden. Most resorts are still open at present, all taking strong measures to prevent virus spread. Here's Idre FjälL. North American RoundupEuropean RoundupAsia Roundup INTRODUCTION NORTH AMERICA Ski Apache, believed to be the last ski field operating this winter in New Mexico, will close today after what they say has been a "phenomenal season". The number of ski areas still open in North America can now be counted on one hand as shutdowns continue in the fight to limit the spread of coronavirus.&nbsp;That hasn’t stopped people skiing and boarding in many areas with a number of areas welcoming ski-tourers still, although others are stressing this isn't permitted and/or

Just returned from a short break in Villaroger (10 years since my previous review) and having read a report in the Guardian a few weeks ago didn’t know what to expect. I recall the article made reference to extra beds and modernisation etc. Thankfully, the only difference I noticed was a large number of snow cannons that had apparently been installed this winter to make the descent to the village easier when snow was scarce. Typically, I assume they had remained unused all winter as the snow depth was incredible for this time of year. Stayed in a family run chalet a couple of minutes drive from the slopes which (apart from the hangover due to the never ending wine supply) was ideally situated to do Ste Foy, La Rosiere to Italy, Les Arcs and for a couple of extra Euros we popped over to La Plagne via the Vanoise Express which is an experience! Val and Tignes will have to wait.... So for a traditional (no nonsense/no queues/no head banging 3am disco on your doorstep) rustic alpine experience Villaroger appears not to have changed. And I for one, hope it stays that way.