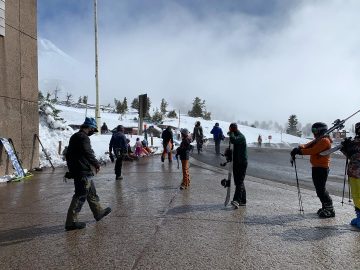 The number of ski areas open on earth may be five or less for a few days next week – probably the lowest number since the rapid growth in ski area openings in the 1960s and the first summer ski areas opening. Although the pandemic closed most resorts for much of the past 10 weeks or so, ski areas kept operating in some countries like Japan until mid-May, and that overlapped with ski areas that had been closed starting to re-open in countries like Norway, meaning the world total open didn’t drop in to single figures. Late May is traditionally the quietest month of the year though as most northern hemisphere ski areas have closed and most southern hemisphere centres

Andes Tower Hills got me extremely stoked to go to the lift every day. I felt the pistes had a good variety of terrain, but I felt that the off-piste was lacking. I would have liked to ski in the trees more. Why were there no moguls at this resort?
As a carver, I was impressed with Hollywood High. It is in the top 10 carving pistes in Minnesota. I noticed some locals carving on Atomics. I was told they are a legendary group called The Atomic Posse. I should invite them to ski Austria sometime. They would fit right in!
There were too many boarders at this resort. I think the kinder around here watch too much MTV. Austrian kinder ski, not board! They also prefer to stay on the mountain in the snow, not in the park bonking on picnic tables and sliding on a railing.
All in all this resort doesn't blow. It needs more off-piste skiing and moguls to make it really rule. It also needs more real skiers like the Atomic Posse to show the kinder what skiing is really about. (Not railings)