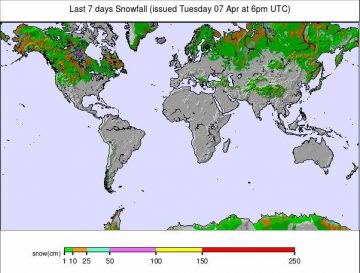 Issued: 08 April 2020 By Patrick "Snowhunter" Thorne North American Roundup European Roundup Asia Roundup INTRODUCTION NORTH AMERICA Mountain High Resort this week Of course, last weekend, or the coming one, would be the usual end of the season anyway for the vast majority of North American ski areas, although some would stay open in to late April, and in some cases May, or even June and beyond. Some of those in that very-late-season opening category could possibly re-open in late spring if, and it’s a big if, it’s considered safe to do so by then.Last weekend did see some fresh snow on western mountains to add to the frustration with what could have been a classic closing weekend, had